The average realized gold price was $1,875 per ounce this quarter, and it had a significant impact on the bottom line. Profits were a new record of $783.3 million with record-high revenues. Gold equivalent production was met after the company maintained operations throughout 2020 despite the impact of COVID-19 across the global portfolio.

The investment thesis is to slowly accumulate KGC on any weakness and build up a medium position. It would be best to use any rally until Q1 2021 to take some profits and wait for some retracement to accumulate again. I will develop this idea in my last part here, called technical analysis.

I believe a potential uptrend could eventually materialize. Still, it seems that the excitement surrounding the gold price has vanished a little, and most of the gold miners have firmly corrected from their highs in 2020. I see 2021 as a transition year for gold.

The immediate issue is that the gold price needs a retracement, and this downtrend process is slow to ramp up, leaving gold investors unsure of what to do.

Data Source: Company release and Fun Trading. Note: I could not calculate EBITDA for 4Q’20 and wait for more information from the company.

Note: Historical data from 2015 are available for subscribers only.

Gold Production Details For The Quarter

Note: The three mines Paracatu, Kupol, and Tasiast, account for 64.6% of the total gold equivalent production in 4Q’20.

The chart below shows the quarterly production per mine for the last three quarters from Q1’20 to Q4’20.

Tasiast mine delivered record production and costs in 2020 for the second consecutive year and is expected to increase throughput to 21,000 tonnes per day by year-end with the Tasiast 24k project.

Fort Knox Gilmore project was completed on time and under budget, with the newly-acquired “bolt-on” Peak project advancing well.

The chart below is impressive. It shows that the AISC (co-product) is now $1,013 per GEO, about average compared to its peers.

Source: Fun Trading files – More historical data available for subscribers only. KGC is the first to report for 4Q’20 so far.

During the year, we continued to strengthen our investment grade balance sheet, more than doubled our adjusted net earnings to approximately $970 million, and increased our margins by 53% to $1,051 per ounce, which outpaced the increase in the average realized gold price. We also instituted a sustainable quarterly dividend to return capital to shareholders, which underscores the strength of our financial position.

Note in the press release about reversal impairment:

Included in reported net earnings in 2020 is a non-cash, after-tax impairment reversal of $612.8 million at Tasiast, Lobo-Marte and Chirano of $299.5 million, $180.4 million, and $132.9 million, respectively. The impairment reversals were related to property, plant and equipment mainly due to higher long-term gold price assumptions.

Note: Generic free cash flow is the cash from operations minus CapEx.

In the press release:

The Company had additional available credit of $1,563.6 million as of December 31, 2020, and total liquidity of approximately $2.8 billion. Kinross had total debt of approximately $1.9 billion at year-end 2020, of which $500 million in senior notes are due in September 2021, which the Company intends to repay. Kinross has further improved its debt metrics, including its net debt to EBITDA ratio, and continues to prioritize maintaining and strengthening its investment grade balance sheet.

Kinross announced a growing three-year production profile, with production expected to increase by approximately half a million ounces, or 20%, to 2.9 million Au eq. Oz. in 2023. 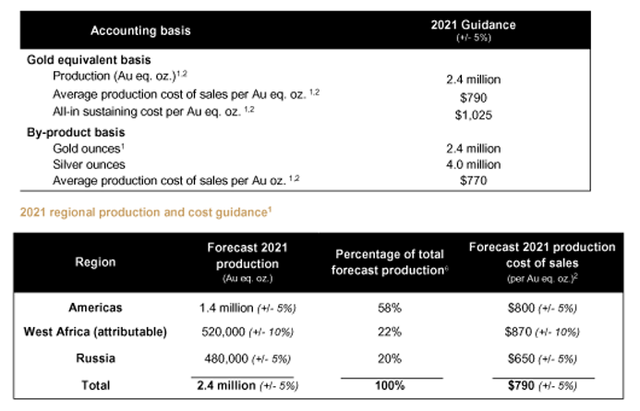 The 2021 forecast for exploration is up this year to approximately $120 million, all of which is expected to be expensed. It will be spent on exploration projects acquired in 2020, such as the Kayenmyvaam and Kavralyanskaya projects near Kupol, Chulbatkan, and the Peak development project in Alaska.

On February 10, 2021, the company provided updates on its development projects, exploration program, and estimated mineral reserves and resources. 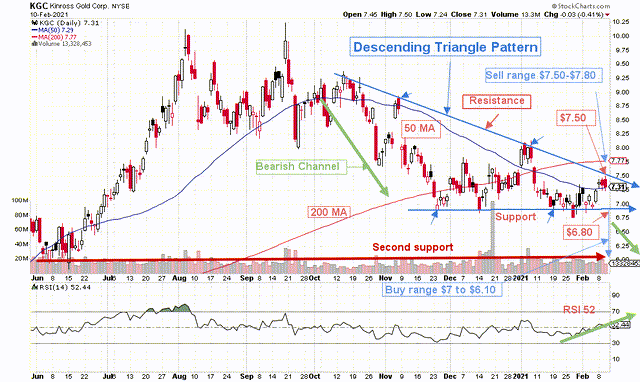 As I have shown in my graph above from StockCharts annotated, this pattern is considered bearish because it is entered from the resistance (see green arrows). Thus, it is important to accumulate between $6.90 and $6.20, in my opinion. Conversely, I recommend taking profits (partial) between $7.45 and $7.80 (200MA).

KGC is considered a long-term investment. Hence you should never sell out your position but sell partially and buy by accumulation. Above all, look at the price of gold for general direction.